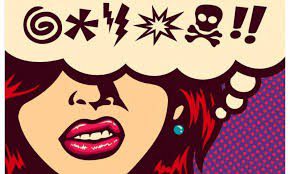 Authenticity and all of its trappings has gotten a bad rap these days. Some claim that it’s simply an excuse to unmuzzle and spew whatever comes into one’s head sans filter and without a care for the feelings of others. Ergo those who readily and regularly include swearing in their convos are often criticized for using ‘authenticity’ as a cover story for their lewd, crude and rude communication choices. I mean, how could anyone not censor themselves out of respect for the delicate sensibilities of others?

I call major bullshit on that.

Anyone who knows me knows I’m a big fan (and user) of swearing. No, I don’t do it to be shocking. And no, I don’t suffer from a condition that prohibits me from self-censoring. I just really, really like it. It’s honest, colorful, descriptive, emotive, provocative and evocative — everything that language should be. It’s also true to who I am, the intensity of what I feel, and a manifestation of my pure unadulterated joy in interacting with others. In other words, swearing is representative of my swagger. When I’m in my place of swagger, it means I’m bringing my FULL self to the party and that’s always good for business — both my own and those I work for and with. If I start censoring myself, who decides when, where and how much? Therein lies a truly slippery slope for anyone.

Swearing is the language of emotion. We use these words to be emphatic or dramatic, to show how important something is or how much we’ve been affected by it. It has the power to carry our truth out into the world with gusto and cut through the noise, especially in the corporate world. It can prove that we really, really care about something and that we’re willing to express it with gusto. Note: This does not include swearing as a weapon — aiming expletives at others — which is unacceptable in my book unless you’re telling someone how “FUCKING AWESOME YOU ARE!” (which is highly recommended). And yet, when our swagger takes the form of more unfiltered verbiage, it can often be an invitation for haters to sneer down upon us for how ‘unacceptable’ and ‘unfiltered’ we are. Well you know what I have to say to that? (Insert expletive here.)

All the Best Humans Swear

Conversely to the concern for the tight assedness of others, swearing can actually put people at ease. It signals that we’re being informal and relaxed and thus more approachable and trustworthy. Haven’t we all cracked a smile when a boss or someone we see as posh drops a casual curse world? “HUMAN” it screams to us. “Hallelujah. This person is actually HUMAN!” The tone is then set and the conversation usually gets more open and lively.

The equal appreciation and controversy of swearing is so profound that countless studies have been done on the subject.

According to a joint study by Maastricht University, Hong Kong University of Science and Technology, Stanford University and University of Cambridge, those who swear like sailors are considered more sincere than those who don’t indulge or keep profanity to a minimum. Need further proof of the trust thing? The fancy shmancy Centre for Public Integrity found that those societies (a.k.a. states) who had the highest percentage of swearers also had a higher integrity score. They were also able to prove a “consistent positive relationship between profanity and honesty”.

Swearing is Smart, Not Just Smartass

Despite what you might think, swearing does not mean you’re lazy, have less of a command of the English language or are less intelligent. Au fucking contraire. Apparently if you want to show off your big brain, you should let your potty mouth fly. A 2015 study concluded that intelligent people tend to use more curse words.

(Side note: Try this test yourself. Time yourself to see how many swear words you can come up with in a minute. The greater the number, the higher your overall vocabulary is proven to be. Hell — why not go head to head with someone else? Make it a team contest. Rip the band-aid right off that taboo-boo!)

‘Bad’ Words Can Feel Good (Wherever You Are)

Wait, it gets even better! Cussing has also been proven to reduce stress and help deal with pain. Apparently swearing triggers your fight or flight response which then causes your brain to release those delicious endorphins that make you feel better. Recently, my 10-year old daughter and I were shopping when she accidentally spilled an entire bottle of water into a bag of groceries. “FUCK” she spontaneously yelped and then immediately apologized. “No need kiddo,” I told her “that was the perfect use of the word.”

And if you’re still on the fence about swearing at work, even that has been proven to be better than good.

A study published in the Journal of Managerial Psychology found that letting those curse words rip actually has positive benefits for staff morale. Yup. This kicks the shit out of the traditional view that workplace swearage is a definite no-no. Oh — and folks would rather work at companies where culture accepts and includes a peppery dash of expletives.

And have you noticed how many incredibly successful business books have included an not-so-subtly asterisked ‘f*ck’, ‘sh*t’ or straight up ‘badass’ in their title? There are entire bookstore shelves prominently dedicated to these provocative tomes. Ain’t no one reading that shit in a brown paper bag. Hell no. Instead, they are proudly displayed on work desks everywhere, not to mention being translated into countless languages. Doesn’t that tell us something about what truly resonates with us humans?

All this to say that speaking plainly and openly is cause for celebration, not censorship. Sure, it’s good to get a sense of the tolerance of others. We don’t want to actively offend. But if swearing is part of your truth, then know that it’s OK to use to when and if necessary and that being in the office doesn’t preclude limiting your word preferences. Like all language, it’s a choice and like all choices, you need to make them for yourself and take comfort in the knowledge that they don’t make you a bad or ‘offensive’ person.

For the record, I’ve found that most people have no problem with swearing when you use them to emphasize the positive or sympathize with the negative. Funny that.

So here’s to expressing yourself bullshit-free, however that may manifest. Your swagger will thank you!