5 Things Blocking Your Swagger (and What to Do About Them) 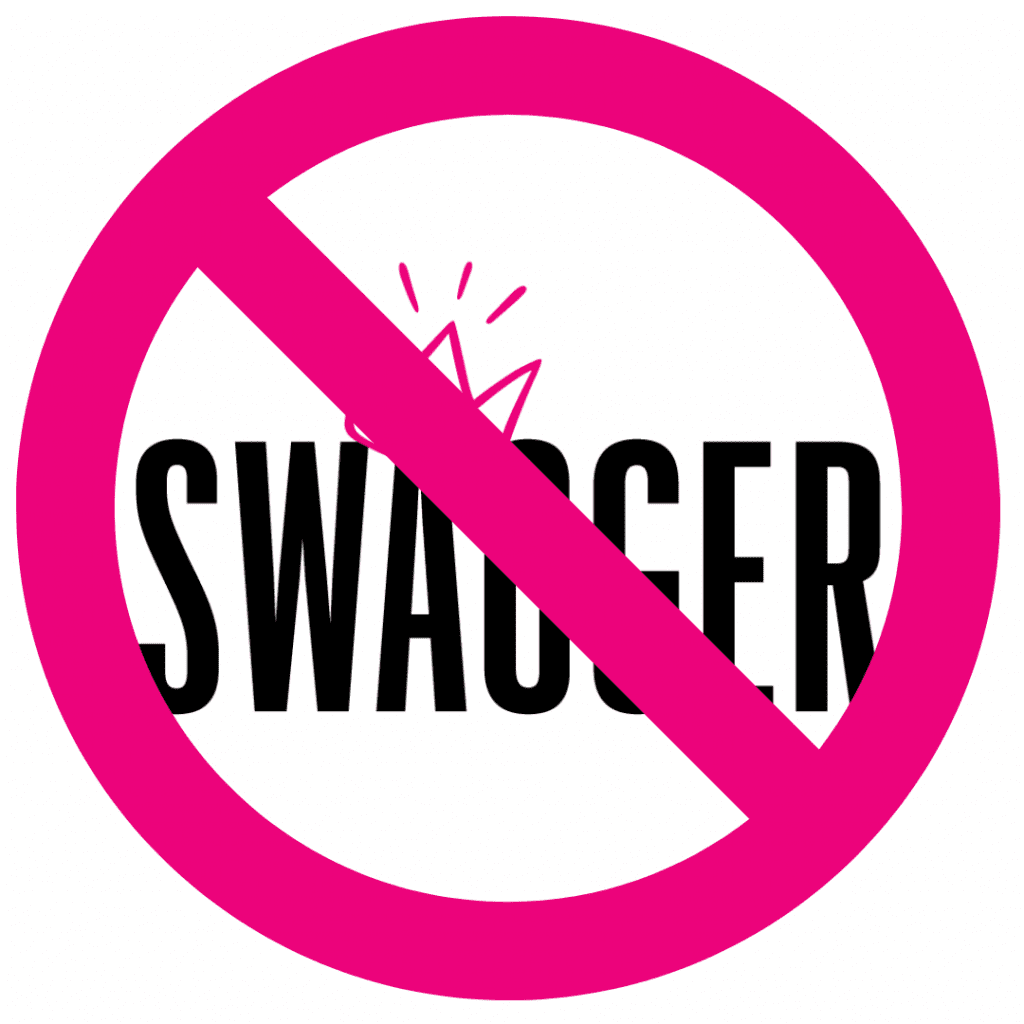 Trying to unleash your swagger (AKA your authentic most powerful self) can be a daunting task. As your truth and realness tries to navigate out into the waiting world, its going to encounter serious obstacles built up over years of conditioning. But with a little swagger “know-how”, the real you will emerge triumphant!

Here’s the top 5 things just waiting to slow that swagger down and a what you can do about them.

1. Persona: Most of us have a fundamental need to appear perfect. We want to seem credible, capable, and confident at all times. But we aren’t (and neither is anyone else, so don’t be fooled). That false front we put on to literally mask our humanity is actually getting in the way of connecting authentically. Instead of faking who you are, take a minute to notice when what you think and feel don’t align with what you say and do. That’s persona talking. Then stop, correct, and force yourself to admit it out loud. Its liberating, connecting and forces that false persona to stand down.

2. Ambition: Ambition has a terrible way of making us behave inauthentically because we think that if we’re mere mortals, we won’t get ahead. This has been proven to be patently incorrect. So instead of only focusing upwards to the next rung of the latter, focus on being in your place of excellence and don’t be afraid to talk about your accomplishments. They will get noticed. More importantly, focus on your followers. Mentor, guide and be unselfish in raising others and in turn they will help lift you to success. You can’t be a leader without followers!

3. Insecurity: We all suffer from it. Those negative, self-limiting voices in our heads have been built up over a very long time. And putting our fingers in our ears and singing won’t make them go away. Instead, you need to record over them with a positive, affirming talk track. Use proof of your accomplishments as your foundation and whenever you hear that nasty inner critic start to spout its venom, immediately counter with FACTS to disprove it. Over time, this will be the voice you hear!

4. Fear: Fear is a sensation designed to create the aversion to the unknown and keeps us trapped in the past – only doing what we’re comfortable with. So when fear gets in the way of your swagger, ask yourself “what’s the worst thing that could happen?”. Allow your brain to spin the most outlandish narrative about what fate awaits if you show the world who you really are. Then ask “at what point did this story cease to be realistic?” Track back and you’ll discover that your fear far outweighs the reality of the situation. Now all you have to do is step over that manageable barrier instead of trying to climb a mountain!

5. Pain: Pain is incredibly hard to push through because it serves as proof for how things can go wrong. But remember that pain is merely the memory of past situations. As soon as one element has changed, the outcome is likely going to be different. So when painful memories threaten your swagger, do a quick accounting of how many elements are different now. Are you older, wiser, more experienced? Are the players different? The environment? When you realize that your pain is in the PAST, swagger has the best chance to be a part of your future.